The Tinkering Studio of the Exploratorium (YouTube) by Simone Aliprandi, labeled for noncommercial reuse.

A group of researchers and practitioners working in the informal science education (ISE) field developed a jointly negotiated learning dimensions framework based on research conducted at the Tinkering Studio in the Exploratorium, San Francisco, California. Purposely selected participants from fourteen after school STEM programs were video recorded while tinkering in one of three activities (circuit boards, wind tubes, and marble machines), over a three week period. For the next eighteen months researchers and practitioners in a multi-step design process, jointly negotiated to revise and refine the learning dimensions, based on video evidence collected during the STEM programs. This article adds to the research literature on what learning looks like through making, while delineating a jointly negotiated research process that not only addresses the reality of practice, but also links to the importance of validity in research.

The provision of a tinkering learning dimensions framework and subsequent development and discussion of the four dimensions, their indicators and descriptors, offers a rich entry into the possibilities of tinkering for learning, including an insightful example of the dimension of social scaffolding to support conceptual change.

The design-based research (DBR) methodology employed by the research team provides participant and practitioner discussion clips, which evidence the tensions between understanding from a practitioner’s standpoint, and the necessity for verifiable knowledge on the part of researchers. The commitment by researchers that “practitioners would have the last word” (p. 103), speaks to their “goal of producing knowledge that the practitioners would use in their practice” (p. 103), and emphasizes the level of commitment to the participatory research process.

The authors attempt to address the practical concerns of educators working in formal environments, particularly their ability to observe and document intentionality and understanding, by presenting comments from a massively open online course (MOOC) on tinkering offered by the Exploratorium. They suggest that informal learning environments may have a role to play in augmenting and supporting tinkering opportunities, as well as stating that further research is needed on how teachers might adapt tinkering to a school setting. After reading this article, the question remains: Could the tinkering learning dimensions framework and the methodological approach used in this research be adapted to a school setting? And if so, how?

The purpose of this article is to develop an understanding of makerspace as learning environment by describing three key elements – tools, community, and mindset. Though the author states that there is no set definition for making, he references terms such as tinkering, hacking, rapid prototyping, and digital fabrication as varying types of activities found in makerspaces using different types of the first element, tools. Digital tools that are readily affordable and available can lower barriers to participation in making. Of these tools, there are two classes, digital physical tools where materials are shaped into new forms, allowing students to produce multiple, identical, shareable items of high quality, and digital logic tools or microcontrollers, mini programmable computers which can process input from a variety of devices. A second makerspace element, community, exists not only because of shared interests, but also because of the face-to-face and virtual infrastructure that allows for the development of identity and domain knowledge. The third element is the makerspace mindset, as exemplified by the particular qualities of playfulness, an orientation toward growth, an embracing of failure, and collaboration. Given these elements, Martin posits that it is reasonable to assume that makerspaces can make positive learning environments.

In that sense, Martin does not tell us anything new, but reiterates what several other current articles do – that further research is needed into what and if students learn when making. Collecting valid evidence and data in regards to mindset, community, and tools may be easier said than done, given the free-flowing aspect of makerspace activities, and the substantive time required to gather rich, detailed evidence to support a stance. Martin does present the potential danger of history repeating itself, where a focus strictly on the tool in the makerspace (as in past implementations of technology, a focus on computers), without a joint convergence on community and mindset, dooms the concept to failure.

The three elements that Martin outlines in particular connect to Engestrom’s model of an activity system in that the object is the tool, the resources are the community, and the agent is the subject’s developing mindset.

What is not presented is a realistic design for gathering robust evidentiary detail regarding what and if students learn when making, in relation to the elements of tool, community, and mindset. These are the questions I would ask to further explore the promise makerspaces in education.

The authors begin by presenting a brief history of making and educative practice, including current trends. They state that through these trends, “Making thus looks and feels different from more traditional open-ended inquiry activities” (p.4). Having said that, this literature review pinpoints research claims within three main discussion areas in the context of out-of-school making activities. They are: 1. Within a learning community, making supports the participation and growth of interests, skills, and dispositions, promoting student agency. 2) The pedagogies that characterize making include explicit discussions of maker identities, formal/informal hybrid models, and pedagogical practices that include design, discourse, documentation, and gradual complexification to support deep learning. 3) There is potential within making, along with cautions, including too narrow a focus on STEM and tools, issues of long term sustainability and equity, and gaps in pedagogy. 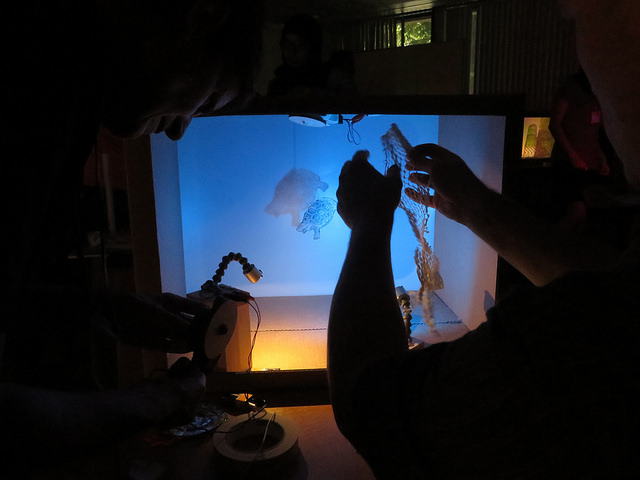 This review is a comprehensive resource on current research around making and tinkering. Though the authors stress the potential of making for learning, and reference early on the dearth of literature available, in limiting the context to out-of-school STEM, it is difficult to accept generalizations about the broader potential for interdisciplinary school makerspaces. However, the three discussion areas do present important topics for immediate consideration, in particular, “cautions, recommendations, and tensions” (p. 34). The notion of hybrid pedagogical models that blend formal and informal learning environments suggest interesting design possibilities, and the exploration of makerspaces as learning environments that develop student agency is an important subject to pursue in juxtaposition to current formal schooling, which often does the opposite.

Though the authors reference pushing students to more complexity in their work while developing the skills and practices of making, there is no mention of conceptual change research within particular domains of knowledge (DiSessa, 2014), or learning concepts in activity, (Greeno & Engestrom, 2014) where the tools and the learning space may foster deepening of domain knowledge through making. There is considerable discussion around pedagogy and flowing from that, the big ideas of STEM, but there is little reference to domain knowledge and practices and its importance in relation to teacher competence.

As a result of reading this literature review, many new questions and possibilities for research have emerged, including the role that conceptual change research, higher level learning in activity, and the merging of formal and informal learning environments may play in designing for makerspaces. The research on making for learning is just emerging, but it definitely shows promise. 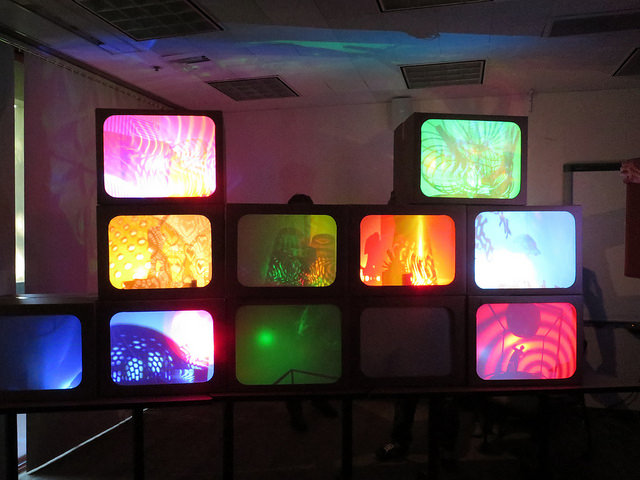 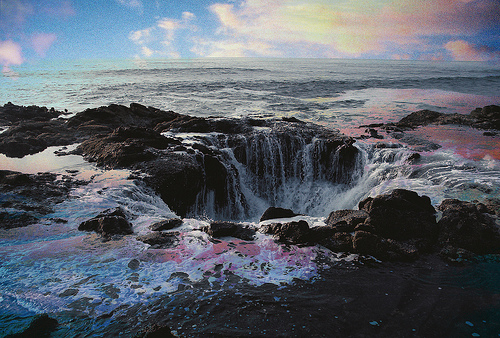 Scholars posit that student engagement flourishes when students study topics of interest, are given authority for learning, and conduct knowledge building through collective advances toward achievement goals (Ames, 1992; Dweck, 1999; Engle & Conant, 2002; Hidi & Renninger, 2006). Azavedo, DiSessa, & Sherin add another factor. They suggest conceptual competence within domain knowledge also defines student ability to maintain engagement in activities. Using design-based research (DBR), they have developed a framework, within a spatial metaphor, as a tool for describing and communicating student conceptual understanding and engagement through participation. They present two classroom mathematical activities, as a territory or “exploration zone” (p. 272) through which students move, and in which they encounter “three structural components of exploration zones – pockets, pathways, and landmarks” (p. 280). Moves through a learning activity or exploration zone come in clusters, which constitute pockets, and several pockets may develop through exploration. Within pockets there are pits, plains, and craters, which may, for various reasons, serve as obstructions to learning. A pathway is the passage from one pocket to another in an exploration zone. Landmarks are “specific contributions to an exploration that, for various reasons, become particularly prominent to both teacher and students” (p. 282), and can be used to propel movement in an exploration zone. Pockets must provide certain conditions in order to sustain engagement, and the authors look to Csikszentmihalyi (1990, 1998) to inform this thinking. Conditions include providing increasingly complex challenges, articulating and grouping conceptual ideas, and promoting movement along pathways toward pockets.

Coming from a classroom background, I completely concur with the authors that conceptual competence is a critical factor in engagement. The spatial metaphor, rich in possibilities, could at best, be a powerful way for teachers to visualize, analyze, and represent conceptual learning in an activity and at least, provide for rich discussion about the development of conceptual competence. However, from a pragmatic standpoint, and considering the workload of teachers today, I am skeptical as to implementation. There would need to be significant professional development conducted with teachers to enable this framework to be usable, and for many, this would require a shift in thinking and a complete redesign of classroom activity. Though not unproductive, the reflection and discussion time required especially initially, will require the long term buy-in of both teachers and school administrators.

This article does add to the thinking around conceptual change research within a complex classroom environment, and offers another example of DBR as a powerful methodology for the practical advancement of new theory. As well, it provides a good example of a participationist approach in mathematics education research.

Given that this framework is evolving, the authors suggest important and significant directions for future research, such as What is the optimal number of pockets in an exploration? Further questions for me include, Would “expert maps” and tools for teacher use, be based on a particular template, and if so, what would the template look like? How does the framework translate to other topic and domain areas? At this point, this idea, though promising, is in the very early stages.